Why Does my Dynamo Keeps Failing

Many people seem to have repeated problems with dynamo's, I believe the problem is that they have not replaced the regulator or it is the wrong one. A dynamo is not self-current regulating, unlike a alternator and will overheat and melt its solder if its output is not controlled. My best advice would be to replace both the dynamo and the regulator at the same time, with good quality matching components e.g. 22amp regulator and 22amp dynamo. After fitting check it doesn't produce more current than it is rated for, example a C40 is rated at 22amps (if fitted with a 5inch fan), if it produces more than 22amps due to a 25amp regulator being fitted it will overheat and fail early.

What Dynamo Is Fitted

An alternator can be bolted to the existing bracket using spacers if needed to make sure the pulleys line up, you will probably need a shorter fan belt, due to the smaller pulley on the alternator. The design of the alternator means it can turn a higher rpm, so a smaller pulley is fitted, this allows it to charge at tick over, this may slow the tick over down and require a small adjustment throttle stop, once the alternator is fitted. The wiring can be easily modified to suit the alternator, see diagram, you can use the original loom if you don’t fit a very large output alternator (34amps) just connect ‘D’ to ‘B’ this can be done by soldering a cable on the back of the regulator if you want to keep and use the regulator box as a junction box and ‘WL’ to the old ‘F’ cable, if fitting a higher output alternator it would be best to run a new cable directly to the solenoid. The normal 30-0-30 amp meter will not work well with a 34amp or higher alternator.

A Dynalite is an alternator in an alloy dynamo shaped casing, it gives the power of an alternator but looks like a dynamo, and it can also be fitted to positive earth cars if you do not want to convert to negative earth. The only disadvantage I can see of this product is the high price of around £395. See picture. 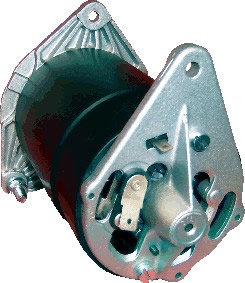